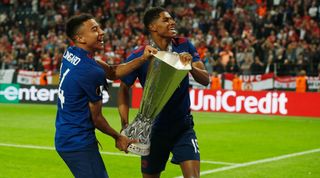 Chelsea and Arsenal continue their quests for European glory on Thursday when they take on Malmo and BATE Borisov respectively.

Amid fairly dreary seasons both will be aiming to secure stress-free passages to the next round, and the chance to take on reamining giants like Inter Milan, Galatasaray or... er, Genk.

However, they're far from the first English clubs to go on a journey through Europe's second-most prestigious club competition: in the last 20 seasons, England has sent 80 teams to compete in the Europa League and its previous incarnation, the UEFA Cup.

For today’s quiz, FFT wants you to name all of the English clubs to have appeared in the Europa League or UEFA Cup since the 1999/2000 season. You have only five frantic minutes to do it – but to make it easier, most of those teams have made multiple excursions into the competition, and you only need to get them once.

Let us know how you’ve fared by tweeting us at @FourFourTwo and see how you compare to our daily leader board. Good luck!

NOW TRY… Can you name the 30 highest Europa League goalscorers?