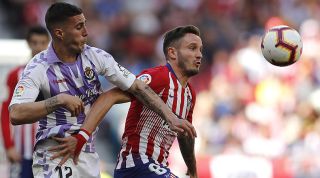 Sporting CP’s Bruno Fernandes has reportedly been “seduced” by Manchester United after the club offered him between £4.5 million and £5.3 million-a-season in wages. The Daily Mirror says reports in a Portuguese newspaper indicate that the midfielder is putting pressure on Sporting to strike a deal with the Red Devils. The two clubs are still a way off agreeing on a figure, the paper adds.

Manchester United have reportedly identified Saul Niguez as a replacement for Paul Pogba. The Daily Express says reports in Spain suggest Old Trafford chiefs have earmarked the Atletico Madrid midfielder as their number one central midfield target and have already contacted Los Rojiblancos about a potential deal.

Arsenal have joined the race to sign Real Madrid’s Marcelo after he told Los Blancos he wanted to leave, the Daily Mirror reports. The Gunners will face competition from Paris St Germain, Juventus and Milan in the battle for his signature, the paper says. Spanish publication Sport claims all of the teams have already made contact with Real Madrid to declare their interest.

Inter Milan are said to be stalling on meeting a £75 million price tag for Manchester United striker Romelu Lukaku. The Sun reports that the Serie A side are struggling to raise the funds to meet United’s valuation and are not yet in a position to make a serious bid.

Meanwhile, the Red Devils have offered David de Gea a deal worth almost £85 million in a bid to persuade him to remain at Old Trafford amid interest from Europe, according to the Daily Star. The paper claims United bosses have made it clear that the long-term deal will not be improved upon following protracted negotiations with the 28-year-old. Paris St Germain and Juventus are said to have been eyeing up the goalkeeper.

Tottenham may have to sell two players to bring in Ryan Sessegnon https://t.co/ICDwVFChnopic.twitter.com/beLSvTHH0Q— The Sun Football  (@TheSunFootball) July 4, 2019

James Tarkowski: Leicester will have to pay at least £40 million to land the Burnley defender, the Daily Mail reports. The Foxes have identified the 26-year-old as a potential replacement for Harry Maguire if he leaves the club, the paper adds. Wolves are also reported to be eyeing up Tarkowski.

Ralf Fahrmann: The 30-year-old is reportedly close to joining Norwich on loan from Schalke. Sky Sports News claims the German goalkeeper is undergoing a medical ahead ahead of joining the newly promoted side for the next season.

BIG INTERVIEW Arjen Robben retires: 'They called me the "man of glass" – but I had the last laugh'