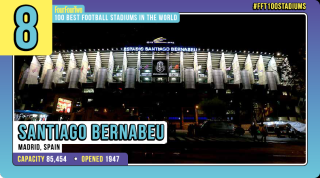 If the Santiago Bernabéu were to suddenly transform into a walking, talking human being – something that would probably provoke an alarmed front page or two in Marca – then Real Madrid’s home would be Albert Einstein.

The most iconic images of the dimension­-chasing physicist are of an ageing gentleman, dishevelled and unkempt. There may even be a hint of a few non­-visits to the laundry. That’s also the immediate impression of the Bernabeu gained by its hundreds of thousands of tourists every year – pilgrims who emerge from the metro outside of the stadium, and set eyes on the Bernabéu for the first time.

FEATURE Who the hell is Santiago Bernabeu?

But if you were able to enter the inner­-workings of Einstein’s brain with some kind of mind-burrowing device, then it would be a dazzling, jaw­-dropping experience. That’s the whammy that awaits the same supporters when entering the Bernabéu.

The seven decades of being plonked alongside one of the biggest traffic arteries of Spain’s capital city have certainly taken their toll. The facade of a distinctly greying ground is showing its age – especially in comparison with the 28th­-century appearance of the Allianz Arena, the exciting ground of Bayern Munich, one of Madrid’s biggest European rivals.

It’s obvious why the club have been desperately trying to gain approval from the city to upgrade the exterior of the stadium and give the Bernabéu an architectural Botox shot, as well as stuff its expanded innards with a high­-end shopping centre and luxury hotel, more befitting a club with such a refined, upper-­class reputation.

The financing is currently in place for a major overhaul, which would fulfil a long­-standing desire to put a roof onto the ground in one of the driest cities in Europe. Galactic water protection for a Galactico club. All that's required now in an institutional sign­-off.

'Dangerously dizzying' is one of the best descriptions of Madrid’s home when standing at the very top of the wrap-around top tier. There is always the feeling that one topple down the stairs would end with a 20,000-feet tumble onto the substitutes warming up far below. It’s no wonder it take a few months before vertigo-­suffering new season-ticket holders feel comfortable enough to make the journey to their seats without clinging to safety rails and openly weeping.

But it is these giddy architectural heights that give the Bernabéu such overpowering acoustics. When a capacity crowd of a little over 85,000 are all feeling the vibe, the sound can barely escape – meaning that the players down on the pitch can barely communicate with each other.

Ever since the inauguration of the stadium in 1947, the Bernabéu has been an ever-r­evolving project both outside and within. The capacity has fallen and risen over the decades depending on safety restraints, and the whims and dreams of the various presidents along the architectural path of history.

However, it's unlikely that the Bernabéu will ever reach the heights of the 125,000 stuffed within its walls in the 1950s, back in the day when entire populations of small countries went to games.

The various overhauls have tended to focus on comfort for some of the world’s most demanding fans – in terms of the players on the pitch and the bums on seats. The Bernabéu must be one of the few grounds where it is sometimes necessary to strip down to t-­shirts in the middle of winter to avoid being cooked by the enormous overhead heaters.

Real Madrid is a club for the rich, powerful and the beautiful of Spain. The Bernabéu VIP zone is the place to be seen. And the innards of the Bernabéu are geared to this very demanding clientele.

Stashed away behind the presidential box are expansive, opulent function rooms where hundreds can be wined and dined with cuisine rivalling that of any restaurant in the capital city. Each VIP or sponsors’ box has what appears to be a smartly ­dressed supermodel at the disposal of the guests.

Visiting players from less lofty clubs must treat their dressing room like a business trip to a top-­class hotel by stuffing soaps, towels and dressing grounds into kit bags. By now, some long-standing Rayo Vallecano players may have bathrooms that resemble the Ritz.

Even the press are treated like queens and kings. The media room is more akin to a theatre with plush seats, unlike the plastic chairs and nasty whiff from the toilets at the Vicente Calderón, which has its mixed­ zone in its dripping, under-stadium car park. The most put-­upon and expendable member of the hierarchy gets his own moment of luxury, too: Real Madrid were one of the first clubs to install what are pretty much La-­Z-­Boy chairs in the technical area, allowing the manager to recline in comfort while it lasts.

At the heart of the empire

From its position in the financial heart of Madrid, where the movers and shakers do business and drink heavily after, the Santiago Bernabéu is not just a place where a football team plays its matches. It’s a positively throbbing power centre, a control hub, a giant monolithic slab of imperialism. It’s a place for Atlético Madrid and Barcelona fans to stand outside, wondering what conspiracies are being concocted, what deals are being done in the presidential suites and boardrooms way up above, late into the night.

To borrow a phrase from Barcelona, Real Madrid is more than just a club. It’s an ever-evolving beast with demands to be permanently on top of the football food chain. And the Santiago Bernabéu is the beating heart of this evolutionary desire.

FEATURE Who the hell is Santiago Bernabeu?