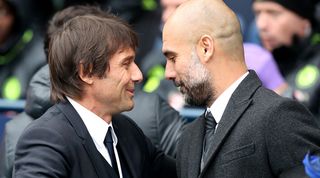 This selection process wasn’t easy. Sure, once we’ve loaded the 50 balls into the big tumbler to pluck them out at random, it looks simple - but getting those balls open can be tricky, as any suited ex-pro at a glitzy UEFA ceremony can tell you.

We jest. But sometimes that method does seem simpler. The truth is, it’s harder than ever to compare football managers across jobs as the diversity within the profession itself increases.

In the misty past, managing one of Europe’s super-clubs was (of course) different to being the gaffer at, say, a second-tier Scottish side. Greater expectations, bigger budgets, better players, more scrutiny, etc. But roles were vaguely similar: the manager was the boss, they picked the team, the tactics and argued with a chairman about which players to sign.

An excellent manager at St Mirren (as Alex Ferguson once was) could still very well be an excellent manager at Manchester United. Now taking on the challenge of an elite club means as much managing internal politics, player egos, agent plots and the media as it does whether you’re going to mark zonally or man-to-man from corners.

Case in point being Zinedine Zidane. This softly spoken enigma has won two Champions League titles in less than two seasons. Yet as he has a squad of players that only one or two other clubs in Europe can rival, some still question his credentials. Could you do it on a wet Wednesday night managing Stoke, eh Zizou?

Well, we’ll (probably) never find out. But it’s a bit petty to dismiss Zidane’s achievements based on what we don’t know about him. Some great managers have been trying to win back-to-back Champions Leagues with some special players for the past 25 years - and none had managed it. So, whether Zidane could cut it on a restricted budget with inferior players is sort of irrelevant. He’s achieving lofty goals at the highest level - and that has to be worthy of recognition.

That said, he hasn’t quite topped our list for 2017. We thought long and hard before deciding on Antonio Conte, as the last thing we at FourFourTwo want to be is little Englanders who just picked the bloke who won the Premier League and say he must be the best in the world.

Conte’s CV is far richer than that. He’s shown he can do it in different leagues (winning titles in Italy and England). He’s proved he can do it at international level (leading an unspectacular Italy side to victories over on-paper more gifted teams). He’s even worked his way up to the big time, having taken both Bari and Siena from Serie B to Serie A before getting the Juventus job.

In other words, Conte is the kind of manager we can say with some authority would likely do an excellent job at any club, from minnow to big fish; at St Mirren or Man United. At 47, he’s in the sweet spot of his peak as a manager. The only major thing missing from his CV is success in the Champions League. You can bet that he’s yearning to put that right soon.

Aside from the question of who to put at No.1, we had to pick 50 managers from around the world. The main problem being that there’s more than 50 good managers out there. No place on this list for the varied talents of Tony Pulis (unfashionable, but a consistent overachiever) or Fernando Santos (come on, you’ve won enough Fernando - we’ll pop you back in next year when Portugal win the World Cup and you and Cristiano celebrate as co-managers).

We simply couldn’t include every gaffer doing a fine job. If your favourite isn’t here, we can only apologise (but do feel free to tell us why we’re wrong – nicely – @FourFourTwo, #FFT50Managers). We’d also like to thank our contributors from across Europe, the USA, in South America and beyond for their insight, ideas and wise words. It’s been a team effort. So let’s share the credit - and blame - with them.