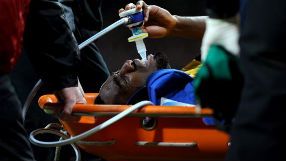 "We have lost Djourou now for the rest of the season," manager Arsene Wenger told reporters after the match.

The injury occurred late in the game at old Trafford when his own team mate Bacary Sagna accidentally ran into his arm while he was on the ground and ripped it out of its socket.

Play was held up for more than five minutes while he was given oxygen before being carried off on a stretcher.