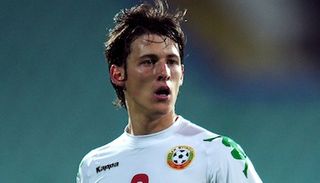 The 23-year-old attacking midfielder has completed a medical and agreed terms. The English club, 15th last term, expect the final paperwork to be sorted out next week.

"Aston Villa is a big club and the manager and club have a belief in young players and in the team ethic," Tonev said on Villa's website.

He added that former Villa captain and compatriot Stiliyan Petrov, who announced his retirement at the end of last season and is now assistant development coach at the club, had played a big part in attracting him there.

"Stiliyan and Dimitar Berbatov have done really well in this league and I hope I can do the same," Tonev said. "They are both great Bulgarian players and hopefully I can do the same and make my mark on the Premier League."

Tonev, who scored a hat-trick in his country's 6-0 win over Malta in a World Cup qualifier in March, could soon be joined by his national team captain Ivelin Popov with Bulgarian media reporting he was expected to sign from Russia's Kuban Krasnodar.