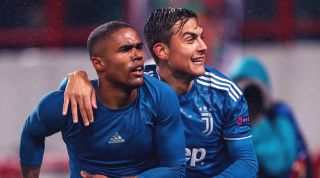 Manchester United may have missed out on signing the hottest thing in English football, in Jadon Sancho - but the Red Devils are still eyeing big signings to bolster depth, according to reports.

With Juventus now entering a rebuild under new boss Andrea Pirlo, a number of the club's superstars are now having their futures considered, with both Douglas Costa and Paulo Dybala big names that could be departing Turin.

Costa is 29 and made just seven starts in Serie A last season, with outgoing manager Maurizio Sarri preferring the likes of Federico Bernardeschi and Juan Cuadrado to the Brazilian. With Juve looking to strengthen in this window, it's likely that Costa will end his three-year stay at the Allianz Stadium, with Pirlo hoping to cash in on the winger while he can.

Dybala, however, was a much bigger fixture for Juventus last season - but while the Argentinian very nearly left Italy last summer for Tottenham Hotspur, Juve could well use him as a bargaining tool for other deals.

TRANSFERS Which Barcelona players could leave the crisis club this summer?

The Old Lady retain an interest in Paul Pogba - the player that they signed from United as a 19-year-old and sold back to them four years later for a record fee. Miralem Pjanic has departed for Barcelona, with Arthur Melo arriving in the opposite direction, while Pogba's French World Cup-winning colleague Blaise Matuidi has headed for sunnier climes, to join Inter Miami.

With Juventus looking to revamp their midfield, they could well use one or more of Dybala and Costa in the deal that brings Pogba back to Serie A. The Bianconeri are apparently still looking to move on Aaron Ramsey too - who they only signed for free on a rumoured £400,000-a-week deal last summer.

TRANSFER SEASON Every Premier League transfer of the window so far

Brooks signed from Sheffield United in 2018, making an immediate impact for the Cherries. Though his second season on the south coast was plagued with injuries though, he caught the attention of Liverpool and Tottenham Hotspur, who have both scouted him. Now, United are looking to add him to the ranks as a potential future star, similarly to how their signed Brooks' countryman Dan James last summer.

While Brooks is a creative midfielder harnessed by Eddie Howe mostly in a wide-right position though, that likely wouldn't be the position that he would slot into in United's long-term vision.

Juan Mata is getting older and Brooks represents an opportunity to replace him with a similar profile. The 23-year-old has the ability to play on the right-wing, as a No.10 in Ole Gunnar Solskjaer's 4-2-3-1 - as an alternative to Bruno Fernandes - or as a central midfielder in a 4-3-3.

Given Brooks's injury history, it makes sense for Solskjaer to ease him into the United set-up, similarly to how the Norwegian has handled Dan James over the past 12 months.