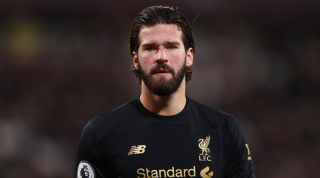 The role of goalkeeper ain't what is used to be, with No.1s required to start moves as well as provide the last line of defence in the modern game.

It's often said that having a reliable man between the sticks will win you several points every season, and the following players are good examples of just that.

The Spaniard would have been top of this list by a distance had he maintained the form that made him the best shot-stopper in the world in the 2017/18 season. Back then, no matter how gilt-edged a scoring chance, you were stunned when De Gea didn’t somehow get a spider-like limb behind the ball.

He’s had a strange couple of years since then, with errors at the 2018 World Cup in Russia spilling over into the following two domestic campaigns for Manchester United.

The 28-year-old can still make saves no other keeper in the world would dream of, but hasn’t seemed his usual self of late.

In an age where goalkeepers are required to participate in build-up play, few no.1s can rival Manchester City’s Brazilian goalkeeper. Whether knocking it first time to Fernandinho between two on-rushing attackers or pinging it 60-yards onto Raheem Sterling’s big toe, Ederson is adept at getting City on the front foot, whatever the scenario.

It’s just as well he’s so valuable to City in terms of attacking, as he’s not enjoyed the best campaign in purely goalkeeping terms, ranking just 12th in terms of save percentage in the Premier League.

It wasn’t long ago Manuel Neuer was indisputably the greatest goalkeeper on the planet. So good with the ball at his feet Pep Guardiola wanted to play him in midfield for a Bundesliga game, the German was also an imperious presence between the posts for club and country on a consistent basis, finishing third in the Ballon d’Or vote in 2014.

Recurring foot injuries over the past 24 months have taken their toll on the Bayern and Germany captain, leading to repeated calls for Neuer to be replaced in the national team by Marc Andre ter Stegen. Neuer has one of the poorest save ratios in the Bundesliga this season but his passing stats continue to impress.

While it’s true he’s not been at his best for some time now, on his day he remains one of the world’s finest all-round stoppers.

Since joining Inter from Udinese eight years ago, the Slovenian has quietly gone about establishing himself as Europe’s top goalkeepers. While he rarely gets the international plaudits he deserves, his consistently assured displays have made him a legend in Milan.

Calm, an excellent communicator and superb in the air, Handanovic is an old school type of goalkeeper, who places an emphasis on defending above distribution. His 74.7% save percentage in Serie A this campaign rates among the best in the division.

The signing of Peter Gulasci, from sister club RB Salzburg in 2015, might have been the smartest piece of business Leipzig ever did. Since joining the side for £2m, the Hungarian has been nothing short of sensational over the five seasons since.

Tall, quick off his line, great in the area and a supreme shot-stopper, Gulasci is arguably the best goalkeeper in Germany. His save percentage of 73.6% is excellent but, in truth, Leipzig’s joint league-low goals against column has as much to do with his organisational and communication skills as his stopping ability.

The Costa Rican goalkeeper never really seemed a good fit at Real Madrid. Despite consistently excellent performances, fans never warmed to him and it felt as if the club wanted a bigger “name” between the posts than Navas. They flogged him in 2019 for a cut price £13m.

After a shaky start to life in Madrid, the former Chelsea no.1 has flourished in the Spanish capital. Brought in as a big name replacement to the aforementioned Navas, Courtois has proven an excellent acquisition and a more fitting long-term replacement to Iker Casillas.

The Belgian boasts the third-best save percentage in La Liga, stopping 71.2% of the shots he’s faced, and conceded just 16 goals in 24 matches, comfortably the best in the division. At just 29 years of age, he is only just hitting him prime as a goalkeeper and may actually be improving.

It takes a hell of a lot for Germans to question a player with the experience and quality of Manuel Neuer but, when it comes to ter Stegen, they’ve been left almost with no choice. How can a player be deemed good enough for the Barcelona no.1 jersey yet not be his national team’s goalkeeper?

Much like the more senior Neuer, ter Stegen has taken the modern idea of goalkeeping to a new level. Immaculate with his feet, he is tasked with building Barcelona’s play from the back.

After an unconvincing start in Barcelona, ter Stegen is now revered for his goalkeeping ability just as much as his passing. Surely just a matter of time before he takes the Germany jersey for good.

One of the two signings, alongside Virgil van Dijk, credited for turning Liverpool from plucky underdogs into European champions and Premier League winners-elect.

Becker was sorely missed at the start of this campaign, after injuring his knee ligaments against Norwich in August. While deputy Adrien did a good job in his absence, the Liverpool back four suddenly started looking just a little wobbly for the first time since the Brazilian joined from Roma in the summer of 2018.

Alisson is, of course, a gifted shot-stopper, but he's also a great organiser and an inspirational presence behind that red-shirted backline. Good with his feet and seeming to be constantly oozing with confidence, goalkeepers like Alisson are a rare breed. Liverpool are lucky to have him.

After winning the first leg 1-0, Atletico Madrid knew Liverpool would throw everything at them in the second instalment of their Champions League last-16 tie back in February.

The attacks came in waves, but time and time again were thwarted by Atletico’s no.1. It was a jaw-droppingly good performance - though nobody was particularly surprised, given the levels Oblak consistently hits.

His 73.1% save percentage in La Liga makes him the second most reliable shot-stopper this season, after Levante’s permanently alert Aitor Fernandez. His 100th clean sheet for Atletico Madrid came in just his 178th appearance for them. He has won La Liga's Zamora trophy for the last four campaigns. Need we go on?

Oblak is the best goalkeeper in the world right now – and might just stay there for a long while.