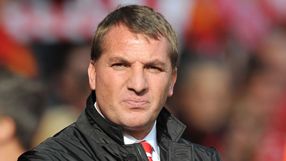 The Reds continued their disappointing start to the Premier League season with a goalless draw against Stoke City at Anfield on Sunday.

Rodgers' side enjoyed the vast majority of possession without finding the net once more – but the Northern Irishman is keen to stick to his principles.

"I'm not one who goes down the desperation route, if I'm being honest," he said.

"In my career, I've won a number of games, especially against big teams, by continuing to play and waiting for those moments at the end of the game.

"I don't really do the desperation one where it becomes a war in the last 10 minutes of the game by taking it longer.

"We work with what we've got, look to find different ways and solutions to score, and then when January comes we'll see if we can revisit that."