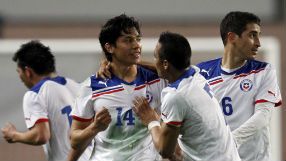 Portugal started strongly, with their wingers looking dangerous and combining to create the opening goal on 16 minutes when Nani's corner was headed in by Silvestre Varela.

The Chileans took time to respond and their first real chance was a 38th minute close-range shot by striker Jean Beausejour that was blocked by Raul Meireles.

Ricardo Quaresma impressed for Portugal after coming off the bench and crossed for Rolando to head just wide on 76 minutes, but his side generally looked disjointed and missed their captain Ronaldo who is sidelined with a hamstring injury.